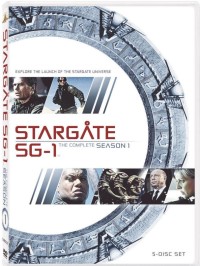 There are a few caveats to consider in some of the episodes: Below is a listing of them for season one and some comments about each.

The age for viewing is not less than 10 and they should be fairly mature at that. Also there is a very strong evolutionary component to the show, boys should be well studied in creationism before watching all science fiction.

Children of the Gods (pilot), Partial nudity and full rear nudity of a female character in the beginning is one of the few times this show has content that is objectionable in its 10 year history. It is lead into in such a way that it comes as no surprise and can be easily skipped or simply have eyes averted to the content… I would not jettison the whole because of this one issue.

Loyalty to a team member is weighed against the safety of Star Gate Command, a deeper moral issue is explored when a team member would rather be dead then live the life he may face.

The role of women in society has been debated for a long time, and in this episode we are given a glimpse into what could be described as an early Asian concept of women. Discussing the proverbs 31 woman is an important step in using this episode for guided discussion. In the description of this woman, she is a mother, a wife, a daughter.. she is not relegated to being pregnant and barefoot but rather is a business woman and merchant in her own right. Not typically all at one time, everything in its season. However this must be moderated against the position God created women to be in. Not inferior just different 1st Tim 2:12 outlines areas they should not be in but Titus 2: 3-5 is clear where they should have a ministry.

Disc 3: The Torment Of Tantalus, Bloodlines, Fire and Water, The Nox, Hathor

Disc 5: There But For The Grace Of God, Politics, Within The Serpent’s Grasp

The Myth of the Robber Barons is an excellent book that sets right the progressive revision of history you find so prevalent in school today.

This is my first post on my blog, so just a brief not on what this is about. We unquestionably live in a post Christian world, not by majority opinion mind you but by minority control of the conversation. It will take time before the adults in the room get back the floor to speak, until then how do we raise boys and train main to become or for many remain Chivalrous. It starts with training, training of the hearts and minds of the youth today and retraining “men” into what is proper manhood. How do we do this while remaining engaged in the society that we inhabit?